Driven by security fears over their digital infrastructure and the resiliency of supply chains, governments and companies all over the world are fighting for dominance in the semiconductor market.

Here, Aalbun explores three reasons why now is the time to be protecting your semiconductor intellectual property.

The semiconductor market has traditionally been dominated by a few countries and regions, namely, Asia, the US and a handful of European countries.

And up until recently, these countries have enjoyed unfettered trade and business relationships with each other, allowing the industry to thrive.

But for how much longer?

A new surge in demand, the will to reduce dependency on foreign suppliers, and the ongoing trade dispute between China and the US have meant that the production of semiconductors has reached a bottleneck.

Mainly driven by the fact that very few countries have access to the latest cutting-edge semiconductor manufacturing practices and the reality that setting up a semiconductor foundry is a fiendishly complex process that can take up to two years to see through, the truth is that there is a shortage of knowledge and manufacturing capabilities to keep up with global demand.

And this is without even considering the impact of the deteriorating relationship between China and the US which mainly centres on the battleground of Taiwan – who are responsible for manufacturing 70% of the world’s microchips. The US has raised the stakes by blocking Taiwanese and South Korean companies from using American tools or knowledge to make anything to sell to Chinese telecoms giant, Huawei, potentially preventing the Chinese from access to the latest semiconductor technologies.

In order to preserve their own interests in the face of this rise in semiconductor nationalism, firms in the EU, US and Japan are looking to increase domestic production. As a result, we expect there to be a surge in patenting activity and the overall growth of the semiconductor intellectual property market – estimated to be worth $7 billion by 2027 – to ensure the competitive advantage is maintained as these countries scale up their own semiconductor manufacturing capabilities. 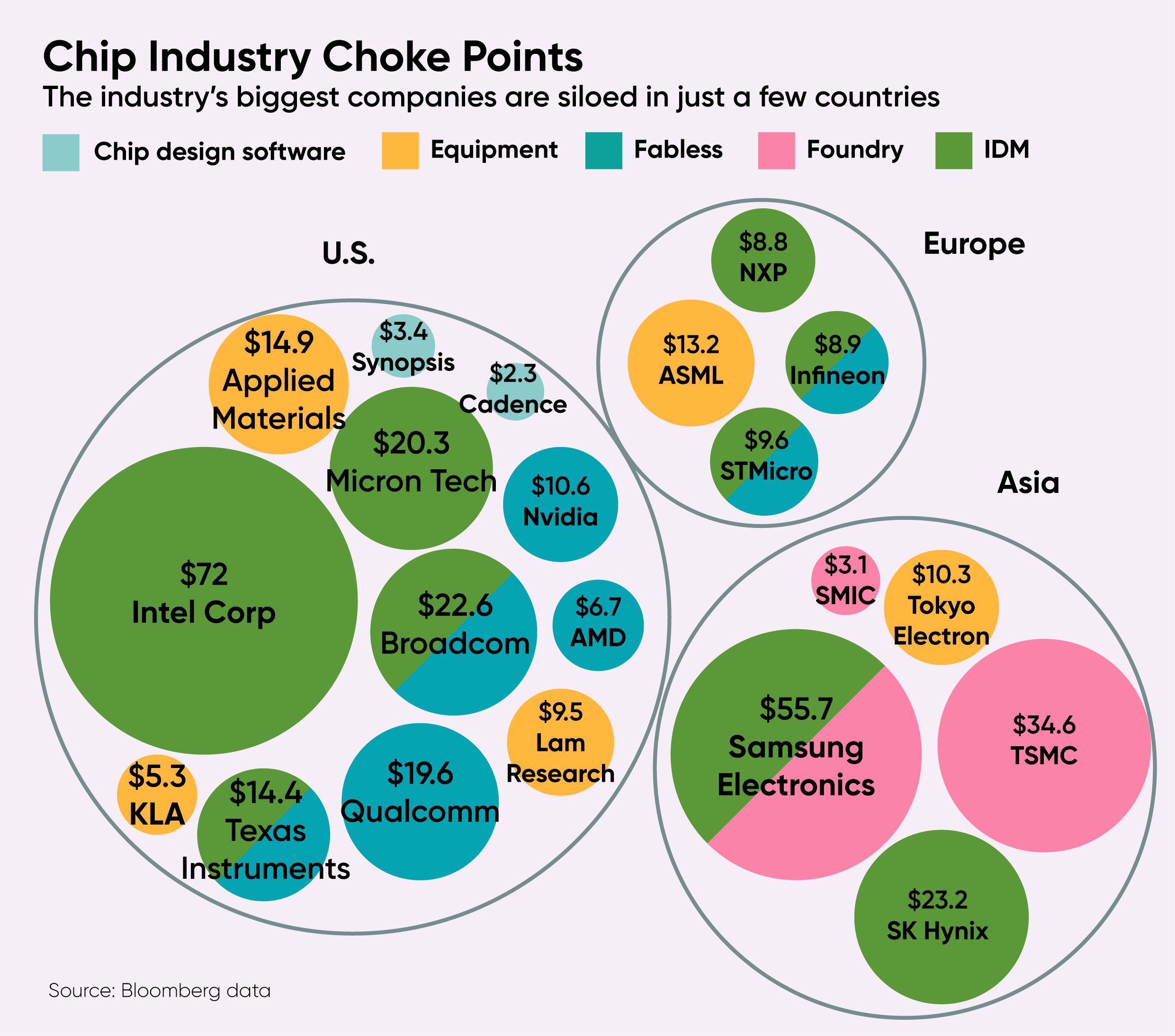 As alluded to above, the supply problems facing the semiconductor industry now will have a significant impact on the makeup of the supply chain of the near future.

Recent headlines have done nothing to dissuade the notion that we are reaching a moment of truth for semiconductor manufacturing.

Just take the news emerging in the past few days that consumers will face rising prices and shortages of consumer electronics as a result of the bottlenecks in the supply chain. When even the mighty Apple, the world’s biggest buyer of semiconductors spending $58 billion annually, are forced to delay the launch of the iPhone 12 because of shortages, the situation looks bleak.

The problem is the concentration of the industry in a few hands. There must be a further opening up of competition to increase supply chain resiliency and avoid a situation where the two global powers are fighting a trade war that will impact consumers on a global scale.

Therefore to have any chance of being a serious player in the industry, patents will prove important and should grow in importance as the smaller players will need patents to get a seat at the table when negotiating deals with the incumbents.

The key to increasing competition is undoubtedly the expansion of semiconductor foundries and access to the latest IP technology. The good news is that the EU has cottoned onto this fact and is now considering building an advanced semiconductor foundry in Europe to reduce its dependency on the US and Asia.

The fact that this project will rely heavily on input from the two leading semiconductor manufacturers, TSMC and Samsung, shows just how concentrated knowledge is and proves that anyone who wants to compete with these big players in this very large market, will need a strong, protectable IP portfolio with associated patents.

But if there’s one thing we know at Aalbun it’s this: competition is the parent of innovation and as competition increases, so does intellectual property activity. Companies should act now to manage and expand their patent portfolios or risk falling behind their competitors. There is nothing more important in business than protecting your ideas.

Semiconductor technology is some of the most advanced in the world and is constantly being innovated and improved upon.

Take the Dutch company ASML. They are the world’s sole manufacturer of the most advanced equipment that is essential to modern chipmaking practices. Their pioneering of extreme ultraviolet light (EUV) has meant ASML can utilise shorter wavelengths that allow the etching of smaller components.

To put into perspective how essential ASML is to the semiconductor industry, consider that the world’s three leading chipmakers – Intel, Samsung and TSMC – are heavily reliant on their technology.

But while ASML’s monopoly on this technology is secure for now, it would be naive to assume that it will last as it faces external pressure to open itself up to the world; the US has yet to grant ASML an export license, meaning they cannot deliver a EUV machine to China. With that in mind, it’s hard to imagine ASML being happy that they can’t access one of, if not the biggest market in the world.

With supply chains blocked and technological expertise concentrated, we expect there to be a breaking point soon that will result in an explosion of technological innovation driven by the urgency to meet increasing global demand.

This innovation race means the ones who will succeed will be the companies who prioritise protecting their innovations in one of the fastest moving sectors.

Aalbun is the world’s first fully digital IP services provider. Our unique Platform as a Service allows you to access all IP services from drafting of patent applications through to tracking, managing and filing all of your IP rights in one simple, secure place.

Try a free demo of our unique platform or speak to one of our team to see how we can help you stay one step ahead of your competitors.